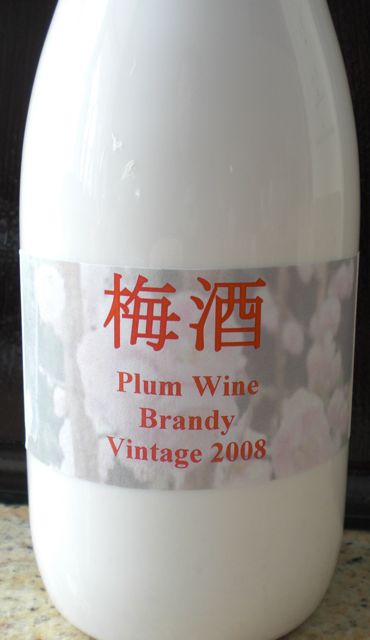 I promised to post "Umeshu" 梅酒 previously. After all, I named my blog "on wine and food" so it is appropriate to talk about plum wines, although it is actually a fruit liquor and not really a wine. Many years ago (probably 25 years or so), while we were visiting Sapporo, we went to a get-together dinner at my late brother's in-laws' place. At the end of wonderful feast, they served us a plum wine which grandma mother-in-law had made many years ago. It was nicely aged and tasted like fine port or sherry--so good. There was no comparison to anything made commercially. Later, when we mentioned this to my mother, she immediately dove into the cabinet under the sink and produced an old bottle of umeshu that she had made and served it to us. Again, it was excellent. These episodes prompted us to make our own umeshu in the U.S. At that time, we were living in California and it was relatively easy to get green unripe Japanese plums or "Aoume" 青梅 at a Japanese market. We started making umeshu at home. The traditional recipe uses rock sugar and shouchu 焼酎 (usually 50 or 40 proof) or Japanese distilled potato liquor. After we moved to DC, it is still possible to get Japanse plums but it was hit or miss. Some years, we got some green plums from our Japanese grocery store. The owner was kind enough to set aside some for us whenever she got them but, some years, we did not get any plums. Thus, our quest to find a Japanese plum tree which will produce good fruit began. 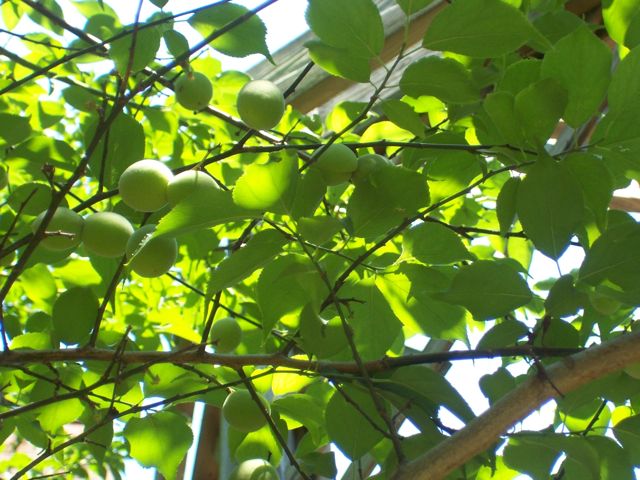 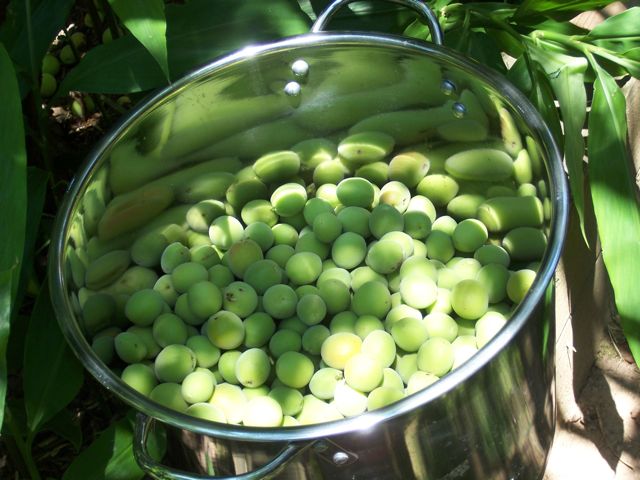 Japanse plum 梅 or prunus mume is more closely related to apricot rather than plum or some cultivars are believed to be a hybrid such as cultivar "Bungo" 豊後梅. Their fruit reportedly is the best for umeshu and umeboshi 梅干し, a Japanese salted plum. We looked high and low but most of Japanese plum trees in the U.S. are stricktly ornamental and all of the tree catalogues we looked at only described how pretty the flower was but did not mention the fruit. After sending many emails to many tree nurseries, one from Washington state responded saying that this one (I do not remember exactly what was the name or cultivar) would produce decent fruit. So we ordered it. It came in the mail in a small brown envelope and the bare root tree was about 5 inches tall. It came in late summer so we put the small "twig" in a little pot on the deck. But winter was fast approaching and we wondered what to do with the little guy. It was not looking particularly happy and we did not think it would survive the winter sitting inside the house next to the window--for that matter we didn't think it would survive the winter no matter what we did. As a desperate measure, we plunked it down into the small raised vegetable patch we have in the backyard (we used to grow tomatoes until it got too shady for that). This was meant to be the plum tree I.C.U. and lo-and-behold, it revived itself and started growing. Now it is about 20 foot tall (see picture above) in the same vegitable patch since we lost a chance to transplant it elsewhere. It started producing fruit in the past 4-5 years. It was a first bumper crop in 2008. Vintage 2008 is our second vintage of umeshu made with estate (?) grown plums. 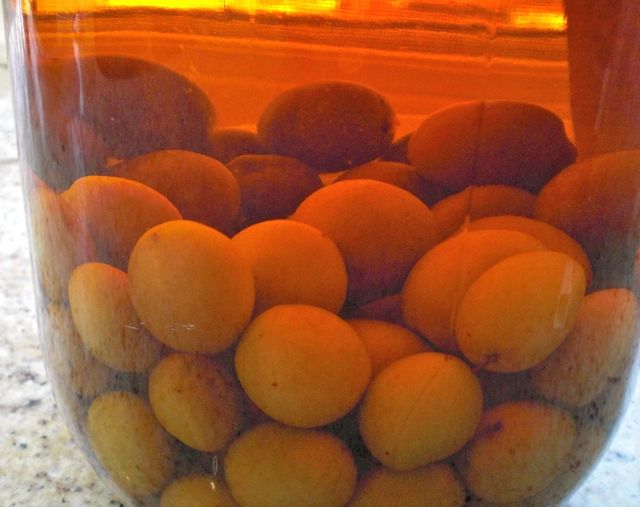 Recipe: Our recipes for umeshu have evolved a little but are based on the traditional Japanese recipes. We use regular sugar instead of rock sugar (since we did not see a big difference in quality of the resulting umeshu and it is rather difficult to get rock sugar) and use either 80 proof vodka and brandy (not VSOP or XO, just cheap Christian brothers). Our regular recipe uses 1lb of plums, 1/2 lb of sugar and 1.75 liters of brandy or vodka. We use to prick the fruit as suggested in a Japanse recipe (supposedly to encourage the flow of juices from the fruit) but this produces a murky wine with lots of precipitate. So, we do not prick the plums but, instead, coat the fruit with sugar and let it stand for one day in a jar so that the moisture is being extrated from the fruit before adding the alcohol. For Vintage 2008, I used 2 lbs of fruit since we had so much. The above picture was the Vodka version. Not intentionally but I left this batch with the fruit for one and half years (I usually bottle it after one year). The brandy version became darker and the fruit is all shriveled up (see picture below, right) as compared to the vodka version in which the fruit looks plump (picture below, left). I am not sure what made this difference. Since the sugar amount is the same, it must be something to do with the brandy (This difference was not apparent when I made brandy and vodka plum wines in previous years). 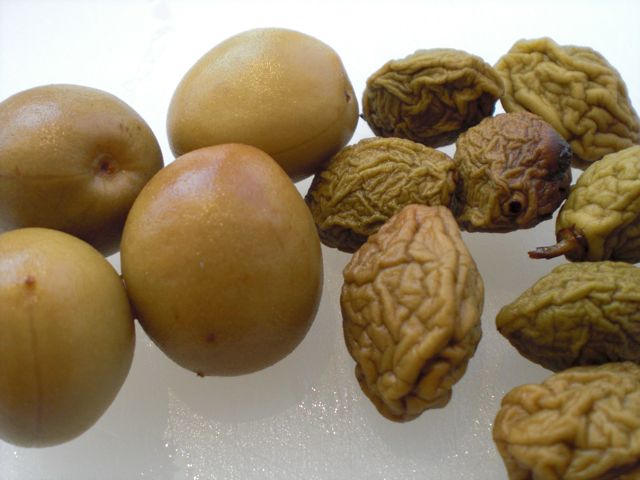 Tasting notes: The taste test was done while bottling. As a reference, we also tasted the old vintage brandy plum wine (I think it is 2000 or 1999 vintage but the label has fallen off). The picture below, from the left to right, are 1) Old vintage brandy plum wine, 2) 2008 Brandy plum wine and 3) 2008 Vodka plum wine. You can clearly see the diference in color. Nose is best in the old vintage with nice strong plum nose with a nutty sherry character. Palate is also the best in 1) with nice mellow plummy taste without any harsh edges despite a high alcohol content. 2) is not bad for young plum wine but 3) definitely has a raw, harsh edges. 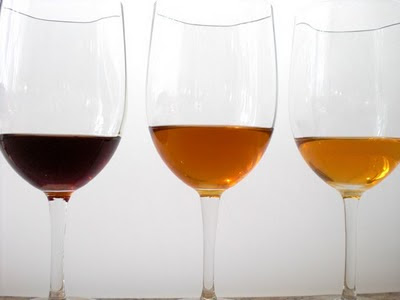 We have accumulated quite a few bottles in the past 20 some years. One of these days, we may be able to do the vertical tasting but it is a bit like Scotch tasting, your have to be very careful, otherwise you will be totally soused after a few tasting.